History of the Hulusi |  Explore New Horizons in Music

A hulusi is a traditional reed wind instrument originating from China and the Shan State, a province in Myanmar. The hulusi has a very smooth tone. Also known as the cucurbit flute, the hulusi has three pipes.

The center pipe has finger holes and is used to sound the melody. On either side of that pipe is a drone pipe. It's not uncommon that only one drone pipe works, leaving the other drone pipe as merely ornamental.

The middlemost extended bamboo pipe has seven holes. You play the hulusi by blowing the small end of the gourd and pressing the holes. As the hulusi is a reed instrument, it contains a reed on the inside that vibrates to produce sound.

It has a useable range of a major ninth (a range from the G above middle C to the A an octave above that).

The hulusi is in the same class as these instruments: the harmonica, the Shruti box, and the Chinese sheng.

Its popularity in China is second to none. It's unique sound garners widespread attention around the world. European composers and performers even use it.

Rohan Leach from England, Herman Witkam from the Netherlands, and Vladiswar Nadishana from Russia have all taken on the ancient hulusi and made it their own with intoxicating sounds and performances engaging their audiences.

History of the Hulusi

The hulusi, thought to have originated during the pre-Qin period of 2100-221 BC, is surrounded in folklore.

As mountain torrents broke out, long ago, a young man of Dai nationality took a large gourd and threw it into the river to rescue his lover.

The gourd broke through the rough waters of the river and saved his sweetheart. His incredible faithful love moved even the great Buddha, who then fitted the gourd with bamboo tubes for the young man to play.

The young man played beautiful music and calmed the mountain torrents, saving all the people and his hometown. The hulusi and its melodies pass down from generation to generation.

Invoking the very essence of ancient Chinese culture and spirituality, the hulusi, while known by some of us, is actually embedded deep in the collective human subconscious of us all.

The chances are you've heard its haunting, intoxicating sounds more times than you would ever actually realize. It is the sound of a far eastern civilization that spans not just centuries, but millennia.

Its sound washes over us, inspiring and spine-tingling at the same time. It calls to us from a past that we can still experience now. This beautifully inspired musical instrument is easy to learn and love.

Traditionally handcrafted and tuned to the key of C, this is the perfect gift for yourself and the music lovers in your life. For beginners or experts, this is the ideal new (yet old) inspirational instrument to play. Eco-friendly is always a key feature. You'll be an expert before you know it. 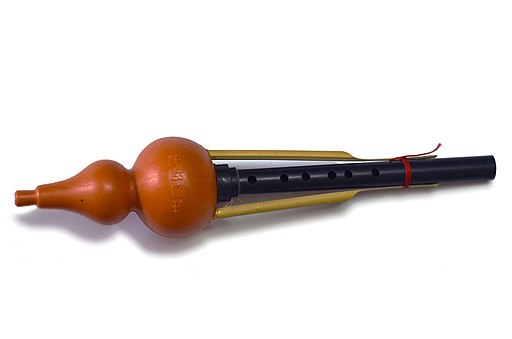 Along with a vegan lifestyle, we encourage you to explore your inner musician.

Try something new! If you're not sure about this instrument, watch Elizabeth, a musician, and a super fan of the traditional hulusi as she demonstrates finger placement and proper technique in playing these pipes.

She's knowledgeable. She keeps it simple. She makes it look fun while teaching you the easy steps in producing a soothing tone unique among instruments.

Fun Fact: The hulusi shares its name with Hulusi Akar, who is not a musician, but a general in the Turkish army.

If you’re looking for more instruction check out How to Play Bawu and Hulusi - A Beginner's Guide to these Popular Chinese Wind Instruments.

This is the first English language book focusing on the hulusi and bawu (another Chinese wind instrument). It offers purchasing advice, basic playing techniques, unconventional playing techniques, traditional Chinese melodies, and even familiar Western tunes are included to help yourself to navigate your new “toy”!

This instrument is not only interesting and full of history, it’s a conversation piece of beautiful music.